Lacoste/Keane Gallery is excited to bring to the East Coast for the first time, the works of Spanish sculptor Rafa Pérez. His first solo exhibition Rafa Pérez: Solo will be held at our Concord MA location from August 3rdto 24th, 2019. To coincide with the opening of this exhibition, the artist will give a free public talk about his works and inspirations on August 4th.

Rafa Pérez was born in 1957 in Haro, La Rioja, Spain and studied ceramics at the Massana School of Art and Design in Barcelona. He has been making abstract sculptures for over 30 years and though prolific and well exhibited in Europe, Pérez has been largely under-represented in the United States –his only US solo show was at the Minnesota State University in 2018.

Pérez’s work is the result of two important factors – his masterful handling of the clay body while letting the unpredictability of the firing be an active participant in the process. This is achieved by mixing his own clay body and experimenting with firing temperatures. It is the element of surprise that motivates him to continuously tests materials until he is satisfied, he wrote, “I try to keep a balanced relation with the fire. I mean the fire has to work by its own as I do, but finally we are a team.” In the work Untitled #8, 2014, Perez applied his own special formula of glaze on wire mesh which crawls during firing, giving the piece a dramatic affect.

Lucy Lacoste, the founder of our gallery surmises, “I have been watching Rafa Pérez’s career for some time and to me, he is exciting because of his handling of the materials which is innovative and unorthodox much like Jackson Pollock or Jasper Johns.”

My way of working is based on my personal ”opened eyes”and ”looking firstly”point of view. I try to transfer this sensation to my works, and I consider them good when opening the kiln I don’t recognize the pieces as mine and I get surprised. With this process I accumulate in my studio hundreds of tests and objects that fill stairs waiting for the moments to take up again that technique, that way...I use great number of materials due to my obesession with ”testing”. Generally I work my sculptures with pastes that are prepared by me and fire at 1150oc in mono firing. In these sculptures I work with two pastes lately. One of them expands and the other one (porcelain of low fire) is inert. With them the works before the firing are radically different to the final result. I try to keep a balanced relation with the fire. I mean the fire has to work by its own as I do, but finally we are a team. 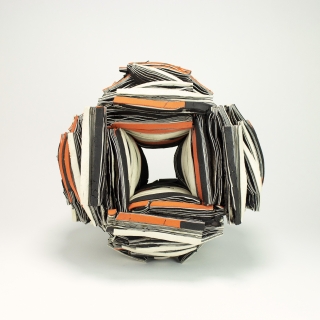 Rafa Pérez
Back To Top